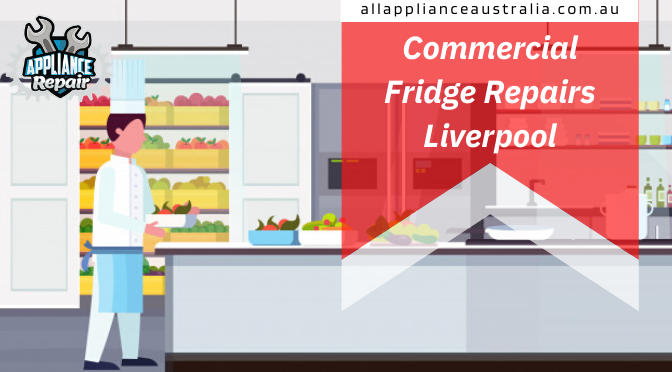 One of the most frequent issues that the commercial fridge repairing service providers face is the fridge not cooling enough. It can happen due to multiple reasons and when it comes to addressing this problem, it is the responsibility of the technicians to find the reason out and solve it. That is what our technicians at All Appliance Repairs Australia do, and that is what they are excellent at when it comes to commercial fridge repairs in Liverpool or elsewhere depending upon the location of our clients.

Here on this page we discuss the 10 most likely reasons behind a typical commercial fridge not cooling.

Frosted coils of the evaporator

Evaporator coils and the fan are located in the freezer zone in any refrigerator. As a result of this, the coils tend to arrest too much frost over time, if not cleaned frequently. Poor cooling at times takes place when excessive frost develops on the evaporator coils and the fan over time. This causes insulation and causes the circulating fan to lose its ability to draw air of the frosted evaporator coils. Well, there might be just a bit of cooling due to the presence of the frost, but it’s nowhere near the cooling effect that the fridge is supposed to achieve.

When the evaporator fan ceases to function, it is unable to circulate the cool air inside the food compartment, and thus reduces the cooling effect even if the fridge is running.

A glitch in the Compressor

The compressor is considered the heart of a fridge. Thus, when the compressor of a commercial fridge does not work, it throws the entire cooling process out of gear.

If the compressor is considered the heart of a refrigerator, the refrigerant is its blood. When due to a leakage in the system the fridge loses refrigerant, it affects the cooling system drastically, reducing it and rendering the fridge practically useless.

This is another reason why the cooling effect of the refrigerator reduces. When the high pressure super hot refrigerant condenses inside the condenser, it dissipates an enormous amount of heat. However, with the coils remaining dirty and stuffed with debris, the heat is unable to flow out of the coils. Thus, the heat remains back in the fridge, thus reducing the cooling effect.

Snag in the Start Capacitor

A glitch in the Thermistor

Thus you see, there are so many probable reasons behind the commercial refrigerator not cooling enough. Our techies at All Appliance Repairs Australia, during their visits, will weigh all the reasons and find out the exact cause and rectify it during fridge repairs in Liverpool NSW. For further details, call us at 0432 754 596 during our office hours.